Why Do I Need a Status Certificate? 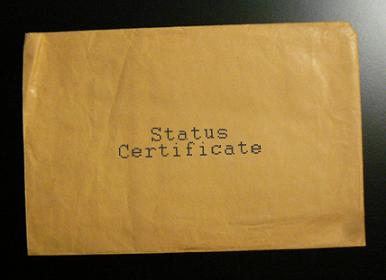 Unless you’ve bought and sold a lot of condos through a realtor, you likely don’t have a lot of experience or knowledge surrounding status certificates.  That’s ok!  Not many people do!

This is a rundown of why you need one and how to find what is important in it.  We’ll run through:

Recently, we’ve modernized our Status Certificate process.  You now go to Dickenson.ca and click on “Resources” at the top of the screen.  There are a bunch of places on our site you can find “Order a Status Certificate”, but you can also go straight to https://www.dickenson.ca/resources/status-certificate-request/

Once you click on “Order a Status Certificate”, it will bring you to a new site that will look something like: 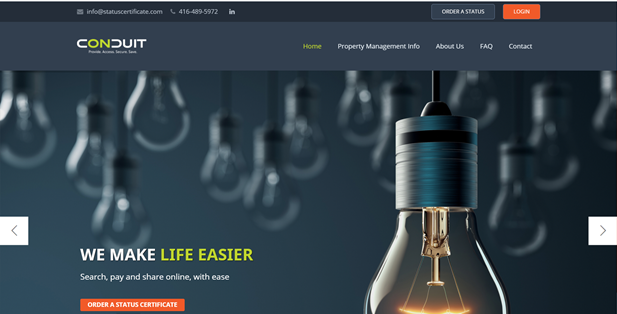 Then, you either click on “Order a Status Certificate” or “Login” (if you’ve ordered one previously through this site, you only need to login).

Follow the instructions it gives you on the next page and start filling out the information we need to complete your status certificate.

You can search your Corporation number, Common Name, Postal Code or even on a Google Map, if you don’t know this information!

Once you find the unit you want a Certificate for, you can then choose your delivery timeline.  If you want your Status Certificate sooner than the allowed 10 days, there is a rush fee associated.

What’s In a Status Certificate That is So Important?!

It is NOT a requirement to purchase a Status Certificate when a unit is changing hands, but it certainly is recommended.

If you purchase a unit without one, you could be buying into a unit that owes significant fees, special assessments or has known deficiencies that you will be forced to fix.

Section 76 of the Condo Act specifies exactly what needs to go in the Status Certificate.

The government has a form that we are required to fill out that gives you a ‘snapshot’ of the unit.

If you don’t order one, you could end up like this couple or not find out the condo you’re looking at has been defrauded until you’ve already purchased.

How do I Look for Important Information in a Status Certificate?

Status Certificates can be 100 pages or more, depending on the amount of information in them.  This is intimidating for many buyers and most Real Estate Agents and Lawyers, unless experienced in Condos, won’t look beyond the fees and money owing.

Questions to ask the professional helping you purchase a unit should be:

But What Does the Government Say?

Status Certificates are regulated by the Condominium Act of Ontario.  The actual wording of the Act states:

76 (1) The corporation shall give to each person who so requests a status certificate with respect to a unit in the corporation, in the prescribed form, that specifies the date on which it was made and that contains,

(b) a statement of the increase, if any, in the common expenses for the unit that the board has declared since the date of the budget of the corporation for the current fiscal year and the reason for the increase;

(c) a statement of the assessments, if any, that the board has levied against the unit since the date of the budget of the corporation for the current fiscal year to increase the contribution to the reserve fund and the reason for the assessments;

(d) a statement of the address for service of the corporation;

(e) a statement of the names and address for service of the directors and officers of the corporation;

(f) a copy of the current declaration, by-laws and rules;

(g) a copy of all applications made under section 109 to amend the declaration for which the court has not made an order;

(i) a copy of the budget of the corporation for the current fiscal year, the last annual audited financial statements and the auditor’s report on the statements;

(k) a statement that the person requesting the status certificate has the rights described in subsections (7) and (8) with respect to the agreements mentioned in clause (j);

(l) a statement whether the parties have complied with all current agreements mentioned in clause 98 (1) (b) with respect to the unit;

(m) a statement with respect to,

(i) the most recent reserve fund study and updates to it,

(ii) the amount in the reserve fund no earlier than at the end of a month within 90 days of the date of the status certificate, and

(iii) current plans, if any, to increase the reserve fund under subsection 94 (8);

(o) a statement of the number of units for which the corporation has received notice under section 83 that the unit was leased during the fiscal year preceding the date of the status certificate;

(p) a certificate or memorandum of insurance for each of the current insurance policies;

(q) a statement of the amounts, if any, that this Act requires be added to the common expenses payable for the unit;

The Boards of Directors have hired us to provide Status Certificates, when they’re ordered.  We, at Dickenson Condo Management, are responsible for ensuring you get timely, accurate information in your certificate.  If you have questions about what is in your Status Certificate, call our office at 519-666-2332 and we’d be happy to answer!